Too much time has passed since my last blog entry . . . I shall now feel Awful about it for the next 8 seconds.
( pause ) …and now I’m finished.
Is there News? Of Course! . . Since the last entry . . . AntiPills.com was listed on “Dark Roasted Blend” ! . . I watched
in the magic window of Google Analytics and timed the intervals on my  Rouchefoucauld as antipills site pages were visited from
Monte Carlo, Beverly Hills, London, Paris, Rome and Staad!*
Also in the intervening time I released “Lydia Landsinger’s Luck Loaded Lozenges”. A Fine new addition to the Magnificent Mock Medicine
Menagerie. 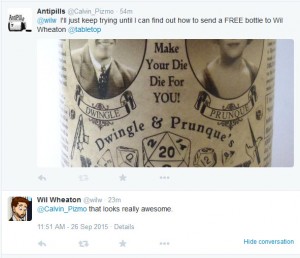 Perhaps though . . the High point that I missed blogging about was a Tweet commented on by none other than Wil Wheaton Himself re: “Dwingle and Prunque’s
Natural Twenty Tablets”. It absolutely Made my MONTH! Anyone fortunate enough to have seen him playing D&D with the Miraculous CRITICAL ROLE . .
will know that he is in DIRE need of that remedy! Hopefully, one day … I’ll be able to get at least the Bottle into his possession. 🙂